The last thing you want to hear when you adopt a puppy is that they are sick. But that’s the sad news a friend received when he brought home a puppy from an adoption event a couple weeks ago. Bad news turned to worse when he discovered that the newly found puppy (and all of its litter mates) had parvo.

I wanted to help. I usually have tons of knowledge to drop when it comes to dealing with illness, yet I didn’t have a clue. I had to find out.

Canine Parvovirus (parvo) is a highly contagious viral disease that is one of the most common causes of diarrhea in puppies under 6 months. It can also affect adult dogs, and has been reported in most members of the canine family (coyotes, wolves, and foxes). Puppies are the most susceptible, and their clinical signs are worsened by concurrent infections with roundworms, other internal intestinal parasites, protozoa (such as Coccidia), viruses or bacteria.

Parvo first appeared in the 1970s, and is one of the most frequent serious dog disease issues in dog shelters.

Early detection and aggressive treatments can usually lead to a full recovery in dogs. However, the mortality rate can be high in shelters, where staff cannot diagnose, isolate or treat cases. 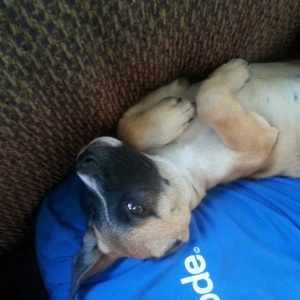 Turns out, parvo is super resilient. It’s very stable in the environment, is resistant to most disinfectants, and can live on organic matter for up to a year.

And parvo is evolving. Different strains have come and gone since the disease was discovered in 1978. The two strains that are most common in the US are CPV-2b and CPV-2c. In a shelter, it is imperative that infected animals be isolated to prevent the spread of illness.

How is parvo transmitted?

Dogs can carry parvo on the hair and fur long after they recover. The incubation period for parvo can be between 4-6 days, and because shelters can struggle to diagnose the disease, dogs can be adopted out without knowledge they are carrying the illness (much like in my friend’s case). Seemingly healthy dogs are suddenly stricken with illness and the shelters and new owners face a long period of recovery and stress.

Parvo can be spread through feces 3-4 days before symptoms appear, and for up to two weeks after recovery. 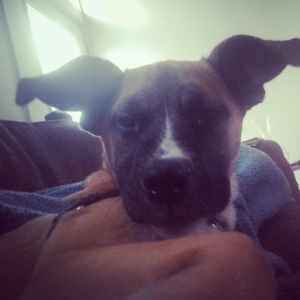 What are the clinical signs of parvo?

Parvovirus affects the heart and digestive systems. Symptoms can include vomiting, foul-smelling diarrhea that can be very bloody, loss of appetite, fever, weakness, depression and dehydration. These symptoms may not appear for 3-4 days after infection and can be hard to diagnose early.

Puppies can become leukopenic, meaning they have too few white blood cells. The heart symptoms are rarely seen today and usually occur in puppies infected in utero or during the neonatal period, but they can cause sudden death without other signs, sudden death weeks to months after apparent recovery from other parvo signs, or sudden onset of symptoms of congestive heart failure in puppies under 6 months of age.

Luckily, my friend’s puppy is making a full recovery. They caught the issue early enough, and despite some rough and stressful days, treatment was successful. Above all, I’m happy for this. I hope that we don’t ever have to deal with something like this with Pickle, but at least now I’ll feel a little more prepared.